The second Nevada (Battleship No. 36) was laid down on 4 November 1912 at Quincy, Mass., by the Fore River Shipbuilding Co.; launched on 11 July 1914; sponsored by Miss Eleanor Anne Seibert, niece of Governor Tasker L. Oddie of Nevada and descendant of former Secretary of the Navy Benjamin Stoddert; and commissioned on 11 March 1916, Capt. William S. Sims in command. 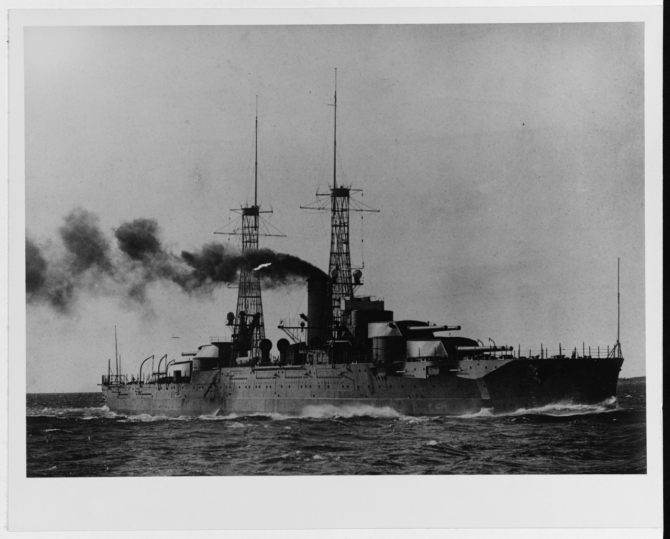 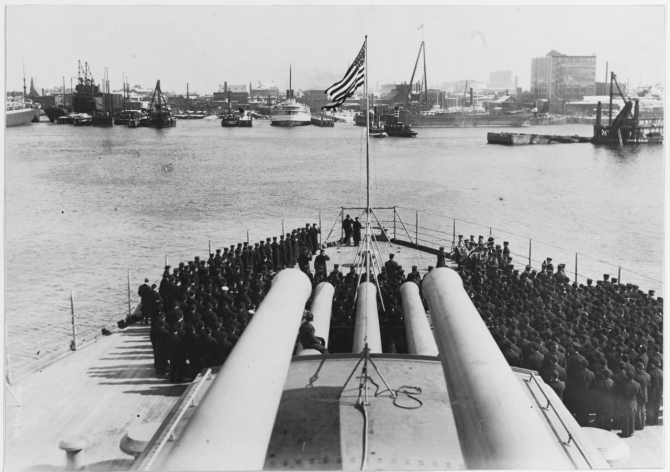 Nevada joined the Atlantic Fleet at Newport, R.I., on 26 May 1916 and served along the East Coast. She operated with the fleet conducting gunnery training and maneuvers off Cuba (January–March 1917). With the U.S. declaration of war against Germany on 6 April 1917, Nevada was at the Norfolk Navy Yard, Portsmouth, Va., undergoing repairs. She refueled on 20 April with orders to get underway the next day. Requiring additional repairs after equipment tests, Nevada finally got underway on the 24th and anchored with the fleet in Hampton Roads, Virginia.

Initially, she was part of the Battleship Division Eight (BatDiv8), later a unit in the Battleship Force, and trained gunners in the Chesapeake Bay based from Norfolk. Nevada got underway and cleared Cape Henry, Va., with the Battleship Force on 13 August, bound for Long Island Sound. The force anchored off Base Ten at Port Jefferson, N.Y., on the 19th and operated from that location conducting tactical and gunnery training until 1 October, when the unit departed for a return to Norfolk. Conducting tactical maneuvers and training en route, the Battleship Force returned to Hampton Roads on 6 October. That same day two officers from the Russian Navy, Lt. Cmdr. B. Besoir and Lt. I. Vouiton, having embarked on 30 September, disembarked. The next day, Secretary of the Navy Josephus Daniels, on board the converted yacht Mayflower, stood up the river and anchored near Pennsylvania (Battleship No. 38). On 25 October, after several days of rehearsals, Nevada got underway and conducted Short-Range Battle Practice and returned to Lynnhaven Roads, Virginia. 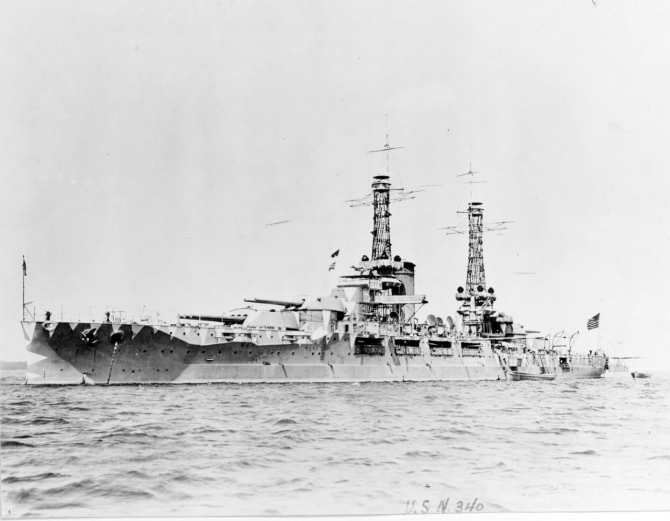 With the onset of 1918, Nevada continued the program of tactical maneuvers and gunnery training through the first half of the year. Adm. Benson, on 30 July 1918, wrote Vice Adm. Sims that the Navy Department was of the opinion that a raid by a German battle cruiser against supply lines, particularly troop convoys, was a possibility and that even the potential chance of a raid should be guarded against. Benson specified plans to station Battleship Division 6 (BatDiv6) Utah (Battleship No. 31), Nevada, and Oklahoma, at Queenstown or Brest, and hold Battleship Division Five (BatDiv5), Arizona, Mississippi (Battleship No. 41), New Mexico (Battleship No. 40), and Pennsylvania, to cover the western Atlantic or proceed where necessary. The Navy Department also asked the State Department to request the Japanese government to detail a division of battlecruisers to join the Atlantic Fleet at Hampton Roads and conduct search operations.

Nevada and Oklahoma, under Rear Adm. Thomas S. Rodgers, sailed from Hampton Roads on 12 August 1918, arriving at Bantry Bay, Ireland, on 23 August. Stationed at Berehaven, Ireland, and designated the Bantry Bay Squadron, this force was intended to counter the threat of a German high-speed raider breaking out into the Atlantic to attack U.S. troop transports and other convoys in the Western Approaches. Utah joined the battleships off Ireland on 10 September. Nevada was to participate in gunnery practices and tactical drills later in September, but she missed the exercises when the accompanying minesweepers were withdrawn prematurely in order to return to Queenstown [Cobh], Ireland.

The Admiralty and the Navy Department agreed to a plan on 10 October 1918 to protect troop convoys when it was reported that German battlecruisers had escaped into the Atlantic. With two troop convoys en route to France, Rear Adm. Rodgers ordered the division, with a screen of seven destroyers, to rendezvous with the convoys. The battleships and escorting destroyers made contact with both inbound convoys, respectively, and in each instance escorted them into the danger zone. Once through, the battleships detached from each and allowed the destroyers to escort them into port. Despite reports to the contrary, the German ships never sortied and the transports were never in danger from surface raiders.

Spanish influenza struck Berehaven at the end of October 1918 and during the week of the 26th, seven members of Nevada’s crew died (along with four each from Oklahoma and Utah). A hospital was established and a strict quarantine enforced. By 10 November, Rear Adm. Rodgers reported that there were few cases of influenza in his force, though two additional sailors from Nevada died that week. During the outbreak, drills were limited to frequent fire control and fire distribution drills conducted at anchor.

The Armistice ending hostilities went into effect on 11 November 1918. Afterward, on 18 November, Nevada steamed for Rosyth, Scotland, escorted by the destroyers Stockton (Destroyer No. 73),McCall (Destroyer No. 28), Davis (Destroyer No. 65), and Trippe(Destroyer No. 33) to join the U.S. battleships, Battleship Division Nine (BatDiv9), operating with the British Grand Fleet as Battle Squadron Six. She, however, arrived too late to witness the surrender of the German High Seas Fleet on 21 November.

Nevada then shifted to Portsmouth, England, to rejoin BatDiv6. Later, they were joined by the other U.S. battleships in European waters and, on 11 December 1918, Vice Adm. William S. Sims, Commander of U.S. Naval Forces in European Waters, arrived and assumed command. The ships refueled and prepared to serve as President Woodrow Wilson’s escort to Brest, France. Standing out of Portsmouth that same day, the battleships rendezvoused on 13 December with the transport George Washington (Id. No. 3018), with President Wilson embarked, and her escort, the flagship of the U.S. Atlantic Fleet, Pennsylvania. Each ship of the force rendered a 21-gun salute for the President as the transport passed their beam. On 14 December, with their escort mission completed, the battleships stood out of Brest, bound for the U.S. 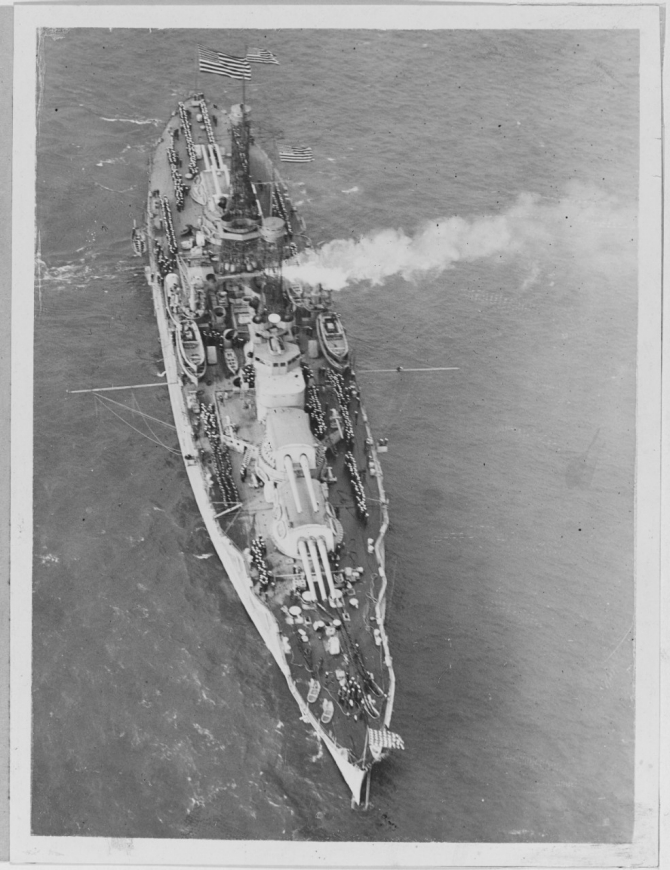 While en route home on 20 December 1918, the battleships encountered heavy seas and rolled heavily. On 26 December, they entered New York harbor and passed the converted yacht Mayflower anchored off the Statue of Liberty with Secretary of the Navy Josephus Daniels embarked; each fired a 19-gun salute; and anchored in the North River. Battalions from the various ships formed and paraded through the streets of New York celebrating the end of hostilities. 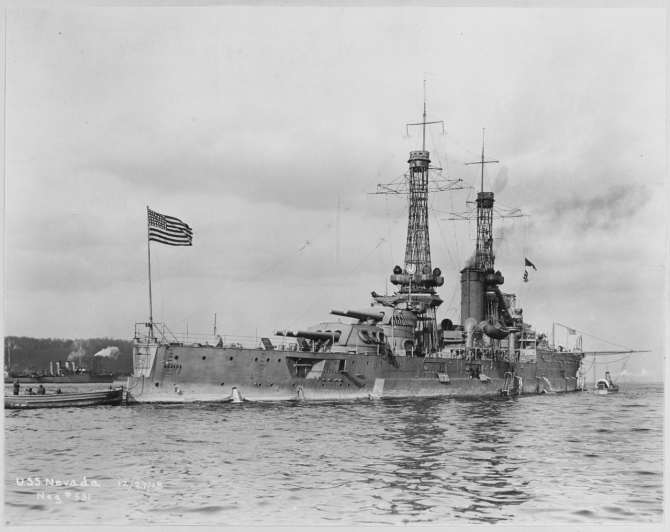 With increased tensions between the U.S. and Japan in 1919, President Wilson transferred a number of warships to the Pacific. As part of that redeployment, Nevada transited the Panama Canal, arriving at San Pedro., Calif., on 9 August. The battleship then cruised with other U.S. ships making port visits along the Pacific coast, at Santa Barbara, Calif.; San Francisco, Calif.; Bremerton, Wash.; and Seattle, Wash.

Halftone reproduction of a photograph of the ship's mascot goat, posed in a life ring. It was published circa 1919 as one of ten images in a souvenir folder concerning Nevada. Donation of Dr. Mark Kulikowski, 2007. (Naval History and Heritage Command Photograph NH 104609) 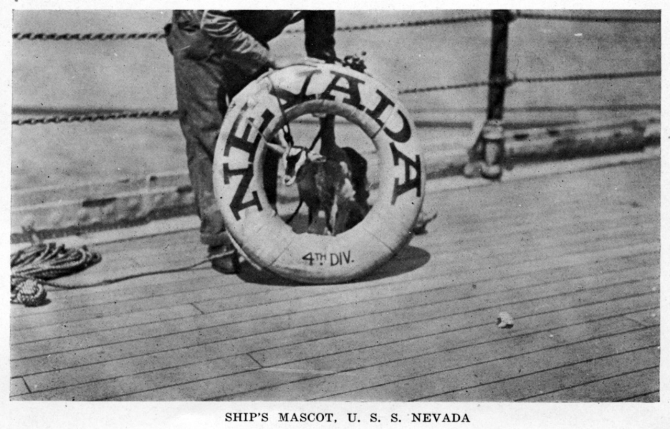 Afterward, Nevada returned to the East Coast and re-joined the Atlantic Fleet as a constituent of Battleship Division Seven (BatDiv7). She was re-designated BB-36 on 17 July 1920.

With Arizona (BB-39), flagship, Nevada, Oklahoma, Pennsylvania, Utah, Delaware (BB-28), and North Dakota (BB-29), BatDiv7 arrived at Guantanamo Bay, Cuba, for winter training on 9 January 1921. The division then moved on to Colon, Canal Zone (C.Z.) and, after transiting the Panama Canal, rendezvoused with the Pacific Fleet under Adm. Hugh Rodman to conduct a night battle practice off Panama. The combined fleets headed south and after crossing the equator, the ships of the Atlantic Fleet visited Callao, Peru. Arriving on 31 January, the fleet remained for a week and then departed to rejoin the Pacific Fleet for athletic competitions in Panama. Nevada’s race-cutter team defeated that of Arizona for the prestigious Battenberg Cup. Afterward, the fleets separated and each returned to their respective drill grounds for additional gunnery practice.

During the summer of 1921, Arizona, Nevada, and Oklahomareturned to Callao (22 July–3 August) to celebrate the Peruvian Centennial Exposition. Nevada then departed for a return to the U.S. With stops at Balboa, C.Z. (8–11 August), San Diego, Calif. (22–24 August), and San Francisco, Calif. (26 August–6 September) en route, Nevada finally arrived at the battleship anchorage at San Pedro on 8 September. She remained in port until 18 November, when she got underway for a visit to San Francisco from 20 November through 2 December. Returning to San Pedro on 3 December, the battleship stood at anchor in her homeport into January 1922.

A view looking forward from the foremast showing a Sopwith One-and a Half Strutter on the aircraft platform atop Turret II, circa 1921. Collection of Delmar Ketch. (Naval History and Heritage Command Photograph NH 93422) 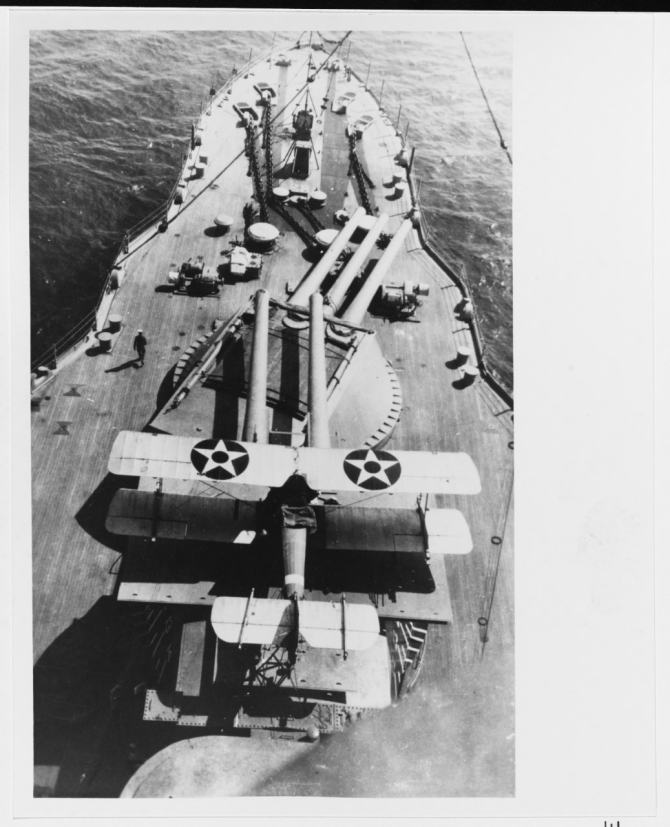 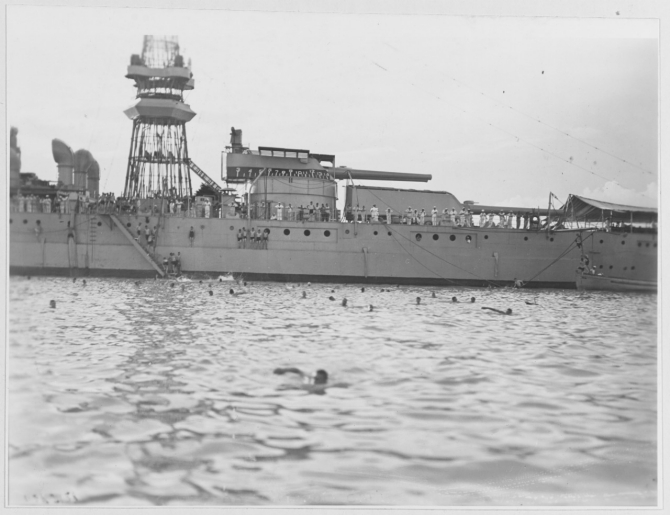 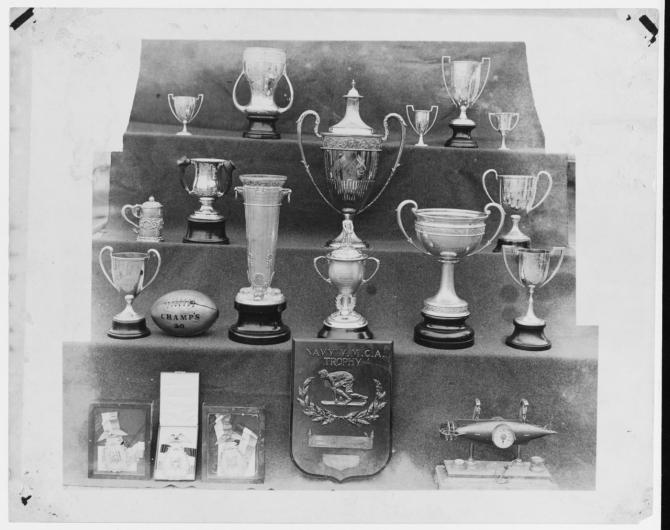 Nevada got underway on 19 January 1922 bound for San Francisco. Reaching her destination two days later, she stayed until 15 February, when she departed for San Pedro and arrived there on the 17th. The battleship remained at San Pedro until 6 May, when she weighed anchor for a return to the East Coast. En route to Norfolk, she visited San Diego (6–8 May) and Balboa (19–24 May), and after passing through the Panama Canal, arrived at the Norfolk Navy Yard on 31 May. She underwent maintenance until 15 August and then spent several days at anchor in Hampton Roads, Va. On 18 August 1922, Nevada and Maryland (BB-46) left for a goodwill tour representing the United States for the centennial of Brazilian independence. The ships visited Rio de Janeiro (6 September–10 October and 18 October–16 November) and Santos (11–16 October), before returning to Hampton Roads on 9 December. Nevada then shifted to Dahlgren, Va., and spent time on the Potomac River (11–18 December) before returning to Hampton Roads and another stay at the Norfolk Navy Yard from 19 December 1922 through 13 January 1923.

While Nevada was en route back to the U.S. on 6 December, a general order reorganized the assets of the Navy, creating the United States Fleet. The two primary subordinate commands were the Battle Fleet, based in the Pacific and encompassing most of the battleships, including all of the more modern ones, and the Scouting Fleet, based in the Atlantic and consisting of older battleships and other units. There was also the Control Force, based in the Atlantic, consisting of light forces assigned to protection of trade routes and defense against amphibious attack, and the Fleet Base Force. Remaining independent of the United States Fleet, were the Asiatic Fleet; Naval Forces, Europe; the Special Service Squadron in the Caribbean; and the submarine force.

Nevada stood out of Norfolk on 13 January 1923, for a return to the Pacific. After a time at Guantanamo for the conduct of gunnery exercises and tactical training (17 January–12 February), Nevadashifted to Culebra Island (21–23 February) en route to the Canal Zone. After transiting the Panama Canal on 23 February, the battleship stood at Balboa (23 February–31 March) before arriving at San Pedro on 11 April. She remained in port until 28 May, when she shifted to Venice, Calif. for a three-day port visit before returning home on the 31st. Nevada spent most of the latter half of the year underway and visiting cities in Washington including Port Angeles, Tacoma, and Seattle. The ship also underwent a maintenance period at the Puget Sound Navy Yard, Bremerton, Wash., from 9 October to 1 December. Nevada returned to San Pedro, via San Francisco (3–4 December), on 6 December and spent Christmas and New Year’s Day 1924 in port. 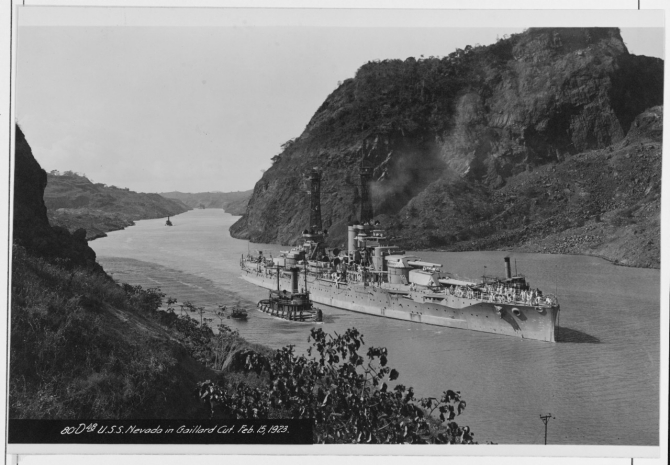